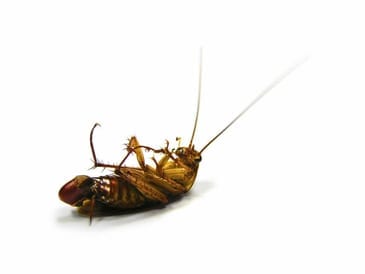 The German cockroach will be the most common Roaches in Kansas City you will come across in your home or business. The German cockroach is native to southeastern Asia. It is considered a nuisance. furthermore, it is the cause of many outbreaks of illness, through the transmission of a variety of pathogens. German Roaches in Kansas City are found primarily in kitchens, bathrooms, or other areas where daily access to water is available. The German Roaches in Kansas City can successfully expand its typical habitat to include other portions of the structure if sanitation is poor. An interesting fact about cockroaches. On a worldwide basis, less than 1% of all the known cockroach species are considered a pest that interacts with humans.

The German cockroach is yellowish-tan in color but the nymphs are black with a light-colored stripe up their back. There are two black parallel stripes on the head of both adults and nymphs. The wings cover most of the bodies of both the male and female German cockroach.

The female German cockroach carries it’s egg casing (ootheca) until the eggs hatch, generally several weeks. While carrying the eggs, she will remain isolated from food in cracks and crevices feeding very little. Depending on the levels of humidity and temperature, developmental time ranges from two to six months. German roaches in Kansas City breed continuously, and populations reach very high levels in short periods.

Pest status: Most people will find German cockroaches in Kansas City objectionable. This is due to the way Roaches in Kansas City spoil food, fabrics, and surfaces on which they crawl upon. Cockroaches are also associated with an unpleasant odor, kind of a musty, sour smell. This cockroach species can become a major pest in homes, restaurants, warehouses, and food-processing plants due to its small size. It can be introduced into structures thru boxes and packaging of food items, equipment and furniture.

Management of Cockroaches in your Kansas City home

Management: After a thorough inspection by ZipZap Bed Bug KC. We will determine the proper techniques that will be required to ensure the eradication of all Roaches in Kansas City in and around your particular structure. Our Board Certified Entomologist will prescribe a program that will be specific to your unique cockroach infestation problem. Through the proper use of baits, growth-regulators, vacuum treatments, or chemical liquid treatments. Your roach problem will be no longer.

Cockroaches as a pest in Kansas City

The most important of the several reasons for considering cockroaches in Kansas City to be a pest is based on the species. German cockroach which invade people’s homes and other buildings can become very numerous. Most people find such infestations of German cockroaches to be objectionable. This is in part because the German cockroach has an unpleasant odor and soils foods, fabrics, and surfaces over which they crawl. The German cockroach, blattella germanica (Blattellidae), has a worldwide distribution. As well as can survive well in association with any human habitation, which provides warmth, moisture, and food. This is a nocturnal species that lives mainly in kitchen and bathroom areas. When a person enters the kitchen of an infested house at night and turns on a light, the cockroaches scurry out of sight.

There are three or four generations per year. Each egg mass (ootheca) contains from 30 to 50 eggs. Each female cockroach can produce three to six ootheca. The potential for rapid population expansion is very obvious.